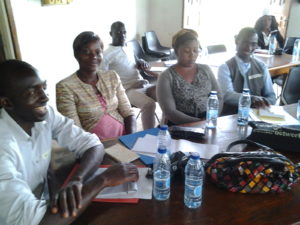 Young people in Cameroon face an uphill task participating in the decision making process despite the existence of the National Youth Council, generally viewed as a youth wing of ruling party. Some of the challenges gathered by YOP, include the reticence of established members of society to embrace young people in the decision making process, political apathy, inequality, with class distinctions preventing young people from lower income backgrounds to interact with, and assume responsibilities in conjunction with, those from high-income backgrounds, lack of trust by young people in decision-making system, poor information about how to become involved in decision making process and the inadequate dissemination of information on human and civil rights. The National Action Plan for Youth (Politique Nationale de la Jeunesse) identifies challenges for the poor participation of young people in exercising their civic duties and the lack of understanding of their basic rights but the government is doing very little to address the issues.

YOP is addressing this disconnectedness of youths from civic action by promoting understanding on democratic practices and good governance; explain human, civil and child rights, and encouraging them to participate effectively in governance for their own and public good. We encourage young people to become active in civil society, to undertake dialogue with office-holders on policy issues; to encourage schools and authorities to provide effective civic education and to encourage local government officers, in turn, to engage young people in deliberations on policy.

Some of our Programs under Good Governance and Human Rights include:

“Strengthen the Capacities of Youth Leaders to Advocate for the Implementation of Youth Policies”.

YOP’s has been working with 15 councils in the  North West (Bamenda 1, Bamenda 2, Bamenda 3, Babessi, Bafut, Bali, Batibo, Fundong, Jakiri, Kumbo, Mbengwi, Ndu, Santa, Tubah and Wum) building the capacities of members of the National Youth Council to advocate for youth policies at local levels. “Strengthen the Capacities of Youth Leaders to Advocate for the Implementation of Youth Policies” was initially financed under the 10th EDF (European Development Fund) with PASC (Civil Society Strengthening Programme). This action of YOP built the capacities of 150 youth leaders in advocacy, lobbying and monitoring of youth policy implementation in their communities. Town hall meetings were organized bring youth leaders, administrative officials, councilors and other community leaders to address issues faced by young people.

Advocating for Youth Policies in Councils: Financed by PASOC (Support Programme for Civil Society Organisations with funds from the European Union, the project aims at promoting youth participation and active citizenship. The project carried out a research in 5 councils of the North West Region with 2000 respondents. Based on the findings advocacy campaigns were carried out with elected councilors and mayors. During the first phase of the project 5 councils adopted Youth Policy Frameworks. In the second phase of the project YOP worked with 12 councils. So far over 300 youths have been trained n advocacy skills. 2 councils have adopted Youth Policies. In 2012 the government of Cameroon finally adopted a National Youth Policy, which has led to a high demand from Councils interested in working with youths, YOP and community members in developing Youth Policies.

Youth Action Plans: YOP has been instrumental in facilitating discussions between young people and local councils in developing Youth Action Plans. In conjunction with VSO Cameroon YOP has been successful in encouraging the engagement of youth in local political processes. YOP has facilitated working sessions between the councilors and youths of Tubah, Santa, and Bamenda 3. Following our work with the Santa Council, 12 national volunteers were recruited by the Council in the Education and Health sectors. Those in the Education Sector were primary school teachers deployed to schools in need of teachers. Some had only 1 teacher! YOP provided training and follow-up to the volunteers. Due to budgetary constraints the Santa Council this year stopped to programme. The impact on the schools and the Santa hospital with be enormous.